“Far from holding up a simple mirror of nature that is true or false, maps redescribe the world—like any other document—in terms of relations of power and of cultural practices, preferences, and priorities.”

I was born in Smithtown, New York, in 1982, and was the seventh of eight children. At the age of three, my family moved to a small town in upstate New York, where I lived until I was 14. Then we moved again, to Delmar, a suburb of Albany, New York. I have been moving ever since.

Given my nomadic background, it’s almost natural that I’ve come to express myself—rather look to shape my identity and better understand myself—in maps. While my early landscapes and figurative works were influenced by the rural environment I grew up in, as well as the feelings of isolation I felt as a child with a learning disability, the representational abstracts that make up my current Cartography Series are not so much a study of emotion, as my earliest works were, but more of a logical and experimental exploration of where I’ve been, where I am now, and where I hope to be tomorrow.

My goal with the Cartography paintings is to, as J.B. Harley writes, “redescribe the world,” or at least the small world of Erik Laffer. And just as there is a language of mapmaking, there is style and body of symbols in my paintings that define the landscape of each work and identify my struggle to understand self, family, home, and culture: boats, clocks, buildings, bridges, anatomy, arrows, and, among many others, lines, color, and texture.

There’s a popular expression: “you’ll learn more about a road by traveling it than by consulting all the maps in the world.”  While I recognize the truth in this, I also believe there is great value in history and charting where we have been and where we are going. And this is what my Cartography Series represents. After all, some roads—racism, sexism, classism, poverty, and all other forms of oppression and discrimination—are better to understand than experience. 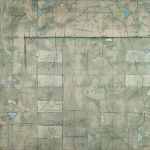 § One Response to Erik Laffer

You are currently reading Erik Laffer at oakroom artists.